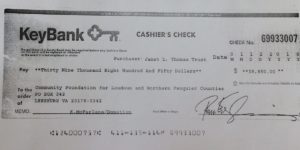 Last week, the Community Foundation received a remarkable check from a new donor—almost $40,000.  And, it was unrestricted.  Yowza.  The donor trusted our judgment on how to apply it most wisely.

It started with a generic email asking whom to talk to about making a donation.  The donor was from London, England, so my radar went up.  I mean, who makes a gift from overseas without any local ties to a community? Of course, I did the net search, revealing their company Website and Linked-In page, none of which offered any clues.  But, seeing those sites did sort of make it real.

After several emails back and forth—all very brief, mind you—we received a Cashier’s check from a Trust fund held at a well-known regional bank.  Same as cash, right? Those Cashier’s checks?  My radar shifted from, “This is too good to be true,” to “WAA-HOO!” And, what’s more, it was for about $10,000 more than the email pledged.   Our Board of Directors was poised for discussion on best use of the funds. We had visions of future software purchases, creation of at least one new endowment fund, and stashing some away in a Reserve Fund.

And then, the shoe dropped.  As requested, I emailed the donor to say the gift had arrived.  He called.

The gift was $10,000 more “by mistake.”  Actually, the donor said, his accountant, who was now in Greece (Sigh*) had made this error and he expected he would need to fire him (Jeez*).  What’s more, he had pledged that portion of the distribution to a family with a child headed into surgery—and they needed the funds immediately.

In my head, I could hear one of my favorite borrowed expletives:  OY.

Of course I couldn’t issue a refund to a family.  I could, I explained, issue the refund back to the Trust if he could give me the name of the Trust Officer, Bank, and details.  That would be too slow, he said.

He did try to cajole. And persuade. I think he may have offered up a few threats, including canceling the gift.  “I’m sorry,” I repeated.  “I totally understand,”  I said, but didn’t say more.  Finally, he gave up, and said he needed to make a round of phone calls to come up with other solutions.

I called our local bank to explain that I was fairly certain we had deposited a large and fraudulent Cashier’s check.  Here was an “A-HA” moment:  Did you know that it can take seven to ten business days to fully clear even a Cashier’s check?

I then spent about an hour on the phone with the bank that supposedly issued the Cashier’s check; it took them some time to determine with conviction that it was a fraud. I’m pretty sure the website of the “company” and LinkedIn page were frauds too, to support the scam.

We filed a local police report, as suggested by the banks.  The nice Officer shook his head and raddled off a list of similar scams they see regularly—most often preying on the elderly, and all too often gaining thousands of dollars in the process.

It’s sad for a million reasons.