Created in memorial to Gavin Rupp who died of cancer, July 30, 2013, at age 13, Gavin attended Eagle Ridge Middle School and loved the game of baseball.  His jersey was #15.

The scholarship fund makes awards to students in the medical profession pursuing training and degrees with a particular emphasis in oncology.

“Our entire family is so grateful for the wonderful medical team members that supported Gavin throughout his 30-month battle with cancer.  We hope that by providing a scholarship to students who will one day work with other pediatric cancer patients, the scholarship recipients can “Pay it Forward” to many others for years to come,” said Gavin’s parents, Chris and Sandy Rupp. Together with Gavin’s brother Ian and sister Abby, the Rupp’s intend to award at least one scholarship annually.
Two students were selected to benefit in 2015: Caroline Nicotra (left), a Tuscarora High School graduate, 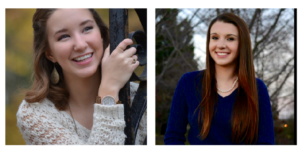 will attend Virginia Tech with aspirations to study biological sciences on a pre-med track in oncology. Nicotra says she loves science, but was inspired by a friend in 4th grade who died of cancer. A second award was made to Brianna Jennings (right), a graduate of Loudoun County High. She will attend Michigan State University on a pre-med track after personal health issues sensitized her to the need for physicians with empathy and care.

The Scholarship Fund also has a new benefactor from sales of a newly published children’s book, Overwhelming Underdogs, written by Jeanne Layman, sold online through Lulu.Com. A coming-of-age story about baseball, proceeds from the book will be added to the Scholarship Fund.

“Overwhelming Underdogs is a book about a boy who looks up to his best friend whom he describes as having a determined spark in his eyes and an unbeatable will-to-win,” says Layman. “The photo of Gavin o

n the homepage of ipromise15.org and his thoughtfulness toward others inspired the main idea of the books and the best friend character. We’re honored to take part in fundraising for the Rupp’s admirable mission of paying it forward.”